The 1920s – Birth of the Sexual Revolution and Modern Era

The 1920s were a fascinating time in American history. It was an era of social liberation, especially for women, that many Americans today are not aware of. It was when the Sexual Revolution began—before retreating back into the closet, and later reemerging.

Most people today probably think that women’s lib originated in the 1960s. However, 40 years before the Swinging ‘60s, there were the Roaring ‘20s. The liberation of the ‘20s came partly from women’s brand new right to vote. But female liberation extended far into the social and sexual aspects of American life. The ‘20s were when many women began wearing short dresses and showing off their legs in public. These sexy young ladies were known as “flappers.” The ‘20s were when it became common for women (especially flappers) to smoke and drink in public, as they ventured into speakeasies with their fashionably bobbed hair and painted faces to drink illegal alcohol (during Prohibition), to flirt with men, to listen and dance to hot jazz music, and to just have a good time.

Notice the photographs from that era. They were the first photos since the dawn of photography in the mid-1800s that show people actually smiling! Folks felt freer than in previous generations.

And folks were probably happier, too. The economy roared with prosperity during the presidency of Calvin Coolidge (1923-1929), a popular Republican who was probably the most libertarian president in U.S. history. He believed in minimizing government power and in allowing private corporations to carry on their business as they thought best. This laissez-faire approach worked wonderfully throughout the decade, though it was blamed for subsequent economic troubles, which resulted, in turn, in the massive expansion of government power under President Franklin Roosevelt. This expansion has, unfortunately, exploded out of control ever since. 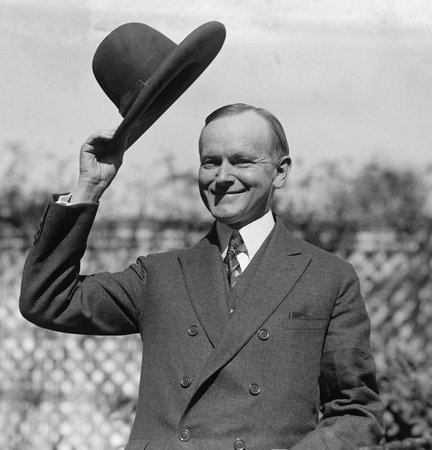 Today, we take technology for granted in virtually all parts of our lives. The modern era, in terms of much of the technology with which we are familiar, first flourished in the 1920s. Airplanes, automobiles, radio, telephones, phonograph records, movies, mass-produced consumer products, widespread application of electricity… these were all relatively new and exciting things in people’s lives. In addition, modern art, modern design (most notably the “art deco” style), and modern literature became popular during the 1920s.

I am really crazy about the movies from this time! Watching them can seem to transport you back there. These were the movies that were made before the Motion Picture Production Code (“Hays Code”), which was first implemented by the U.S. movie industry in 1930 and first strictly enforced in 1934. The code, which remained in effect until the late 1960s, severely restricted the depiction of sexuality in movies. Many of the movies produced before the enforcement of that code are striking in their joyous and titillating sexual expressions. Women are shown in all their feminine glory, flaunting their sexy bodies and engaging in sexually charged dialogue and activities (the kind of content that Hollywood would not show again until the ‘60s). The earlier movies from the ‘20s are all silent, but some of the later ones are talkies.

A great example is the 1929 musical drama “The Broadway Melody,” about two small-town sisters chasing their dreams of stage stardom in New York City. The sisters (played by Anita Page and Bessie Love) are shown in several scenes together that were obviously meant to have erotic lesbian undertones, such as kissing each other on the lips, close-dancing together, and lying together in bed. (I suspect that the movie officials justified these scenes to anyone who raised concerns by pointing out that the actresses were portraying sisters. But I’m sure that the public watching the movie knew what it was really all about.) The movie also shows plenty of skin, with the skimpy, sexy outfits won by the showgirls. 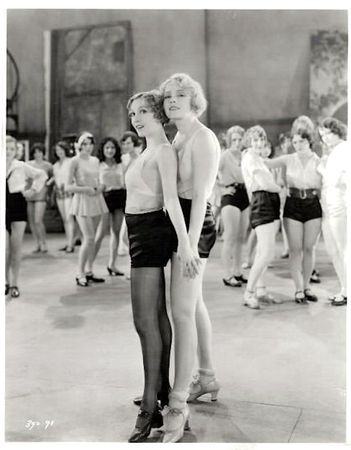 One of my favorite actresses of the flapper era is Clara Bow, whose breezy, ebullient feminine freedom leapt off the screen in her silent classics, such as “It,” from 1927. She became known as the first “It Girl” (an appellation that has since been applied to many other women who possess that special sex appeal), and she was the inspiration for the naughty-but-nice animated character of Betty Boop.

Then there was the immortal sex goddess Marlene Dietrich. She pushed the boundaries of sexuality both before and after the Hollywood code (and both in her movie life and real life). There is the famous scene from her 1930 movie “Morocco” in which Marlene, entertaining a nightclub crowd while wearing a men’s tuxedo, kisses a woman from the audience on the lips. Although this scene is often called the “first gay kiss in movies,” Anita Page and Bessie Love kissed each other on film the year before, as I previously described. 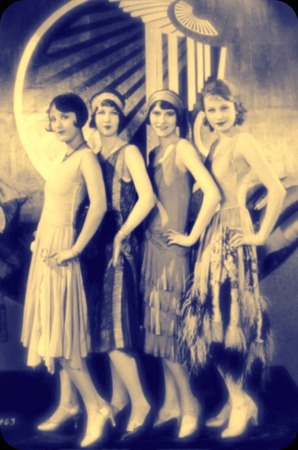 Flappers personified the free spirit of the 1920s more so than any other aspect of that era. The typical dress worn by flappers tells a lot about the freedom and sexuality of these females. The top of the dress was typically sleeveless and with a scoop neck. Skin! The skirt was cut shorter than in any dress style before – usually just below the knees, sometimes just above the knees. More skin!

The short skirt was designed to show off the legs, of course. But it was also designed to move. A flapper dress typically had a low waist, just above the flowy, pleated skirt. This design resulted in the skirt swaying dramatically when the woman moved, especially during fast movements, such as while dancing. The design also served to accentuate the shape of the booty (though I don’t think they called it booty back then). Adding to the drama were beads or sequins that sparkled and shined with movement. The woman who wore this type of dress wanted to flaunt her sexuality, to dance, and to enjoy herself.

I was so fascinated with the flapper dress and all it represented that, in 2011, I purchased an original, vintage, classic flapper dress from the 1920s. I bought it for $450 from Silver Moon clothing store in Chicago (https://silvermoonchicago.com). It’s made with a pinkish-tan fabric and numerous clear plastic beads sewn into an art deco-type design. It’s a beautiful thing.

I’ve always thought that the tactile sense is important to appreciating history. When I go to museums, I like to ignore those “do not touch” signs and touch the exhibits. Feeling the texture and getting an idea of the mass and bulk of an object helps to transport me back in time, making it easier to understand how people of the time used the object and thought about the object.

As a lifelong occasional crossdresser, I knew I would have to slip on that flapper dress and feel it against my skin. When I did, I immediately understood the flapper mindset. The dress makes you feel free, feminine, and sexy. When you move your body as if you’re dancing, the skirt flows from side to side and up and down in a rather wild kind of way. You would want to go out and party in this dress. The other main thing that I noticed was the weight of the dress. With all those beads, it is quite heavy! But it is still extremely comfortable.

As I wore the dress, I wondered about the women who wore it in the 1920s. Who were they? What did they do in this dress? Where did they go in this dress? I could only imagine. The dress takes your mind and spirit back, like a wearable time machine.

It was not until the 1960s’ hippie era that sexual and social liberation enjoyed the open air again in the United States. Miniskirts, long hair, rock music, and drugs ushered it in that time. And actresses such as Ann-Margret, Brigitte Bardot, Ursula Andress, and Raquel Welch brought female sexuality to the big screen like never before. Furthermore, women’s liberation became a major political movement in the 60’s and 70’s (as part of the greater civil rights cause).

Social movements ebb and flow like the tides. Today (as we approach 2020), we are witnessing the next chapter of the Sexual Revolution, especially with the social progress being made by LGBT (lesbian, gay, bisexual, transgender) people. We frequently hear news stories these days about prominent gays and transgenders, such as certain individuals winning political offices, competing in sporting events, starring in television shows or movies, or walking down fashion and pageant runways. This is a seemingly sudden and massive social change that many Americans find shocking, controversial, and even objectionable. Nevertheless, they better get used to it, because it is here to stay. Accept it and deal with it.

Speaking of runways, what could possibly be controversial or objectionable about a sexy beautiful woman, such as fashion model Geena Rocero (who generated much conversation with her 2014 TED Talk)? The fact that she was born male and later became female? Well, Ms Rocero is simply living as she wants to live, and she became who she wanted to be. In that way, she and the other transgender people making news today are no different from the flapper women who blazed their own trails of social upheaval almost a century ago. 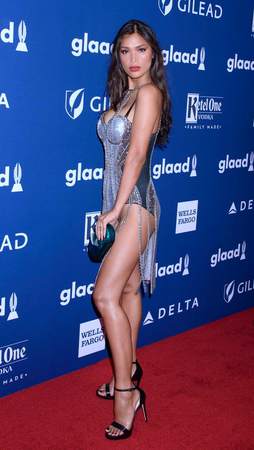 The quests for individual freedom and honest sexuality are among the strongest desires of the human heart, soul, and mind. People must be allowed to express their sexuality and their personality as they please, as long as they do not hurt anyone else. These things cannot be denied for long without prompting rebellion and revolution. The flapper era of the 1920s laid the foundation for the later social revolutions of the 1960s and today. Although such social changes always stir controversy, they are the inevitable results of the human condition. As the American Declaration of Independence so wisely observes, we are all born with the right to “Life, Liberty, and the pursuit of Happiness.”

That’s what it’s all about.